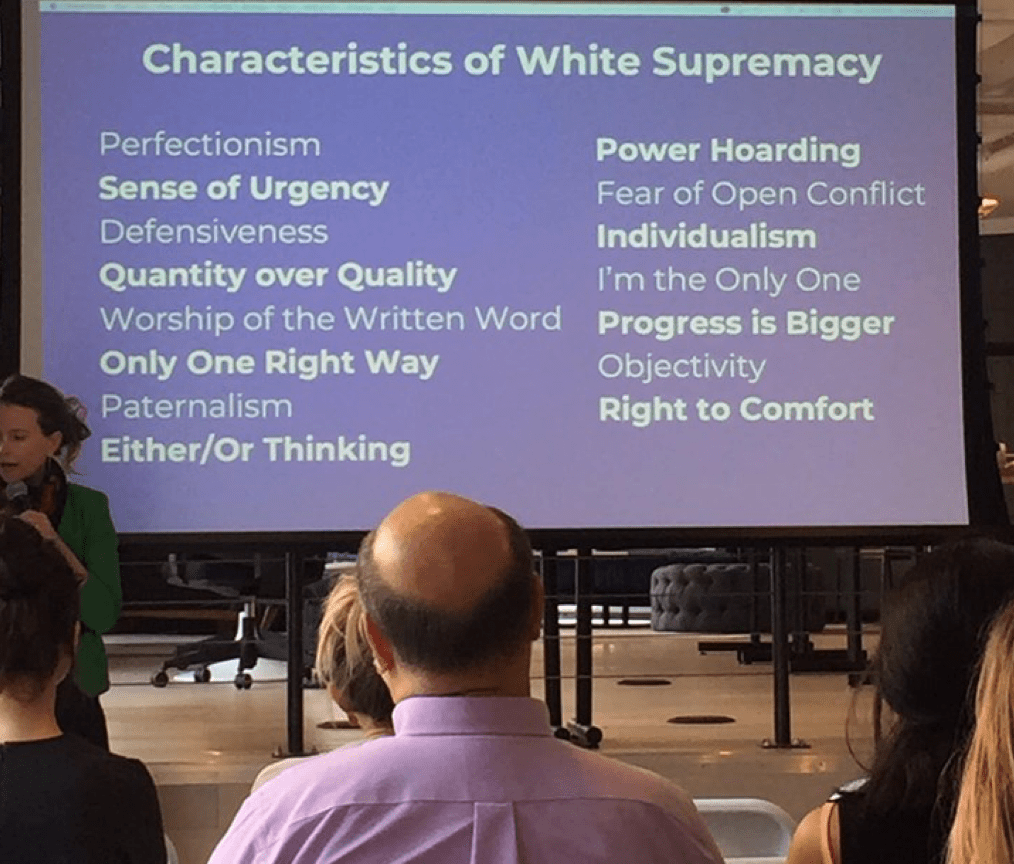 Yesterday I saw the above photo on Facebook, posted by some Christian Intellectual friends. They used this photo as proof that the terms “White Supremacy” and “Racism” are actually weapons being used by the Left to undermine the very foundations of Western Civilization.

I heartily concur with that estimation, and I would like to elucidate one example of the serpent-like cunning that the Left is using to achieve their ultimate goal. It is an example of a “philosophical package-deal.”

The philosopher Ayn Rand defined a package-deal as “the fallacy of failing to discriminate crucial differences. It consists of treating together, as parts of a single conceptual whole or ‘package,’ elements which differ essentially in nature, truth-status, importance or value.”[i]

How is this deceptive tactic used in the photo above? I see a very specific process at work.

The presumed “characteristics of white supremacy” include perfectly reasonable and good ideas:

These are certainly true and noble concepts that cannot be refuted by any honest, rational person. The woke Left knows this, so their only option is to use other means to undermine the credibility of these ideas.

What do we see in this list? The noble ideas are packaged together with vague terms such as defensiveness (with no explanation of what is being defended), paternalism, power hoarding, and fear of open conflict (an ironic charge given the frequent complaint of Western Civilization’s aggressive war-mongering). In the current cultural conversation, these terms are widely understood to be derisive, intended to evoke a general feeling of revulsion in the heart and not necessarily any particular concrete example in the mind.

In addition, a few other choice catch phrases are included: “Only one right way,” “I’m the only one,” “progress is bigger,” “right to comfort.” These phrases are so absurd as to be meaningless, but when included among the “characteristics of white supremacy” they further encourage a response of disdain and even contempt from the woke crowd.

The purpose here is obvious: the Left seeks, without the necessity of reason, logic, and honest debate, to invalidate the good and true ideas that made the West the greatest and most benevolent civilization in world history. Deep down the Left knows that if they debate with reason and logic, they will lose. Therefore, they need to discredit those very concepts as evil tools of the white man. Anyone wishing to fight for truth, for goodness, for their own values, must expose this nefarious tactic for exactly what it is: a demonic lie that cannot be reasoned or compromised with but only exorcised.

Jeff holds a B.A. degree in history and political science from Ashland University and an M.Div. from Ashland Theological Seminary. He’s a full time pastor and part time scholar. Like C. S. Lewis, he considers himself “a converted pagan living among apostate puritans.”

Become a Christian Defender of Reason, Individualism, and Capitalism:

Get our latest book for free when you subscribe

Join our Philosophy Club when you support us on Patreon

Listen to the podcast

Learn about our writing and social media services

The "Wisdom of the World"
What Does Justice Require? — On Racial Reconciliation
Unrealistic Predictions, COVID-19 Lockdown, Cost Lives
What Do Timothy Keller and Don Carson Say About Women Preachers? (Not Much)
Ayn Rand and Christianity?
I Embraced Functional Gnosticism

