FTNCI is pleased to introduce Jeff Kliewer’s new book, Blood-Red Church. Here we reproduce the foreword to the book.


“If one turns away his ear from hearing the law, even his prayer is an abomination.”
-Proverbs 28:9

A sound spiritual life requires Christians to love and uphold the Word of God. They should love what the Bible teaches. Where the Bible is clear, we must be clear, even on topics of social controversy. We do not get a pass, simply because our society or some expert pastor in New York considers an issue “debatable.”

Jeff Kliewer writes Blood-Red Church in 2022, a time of social upheaval. Controversies in American politics have exposed disunities that long existed within churches. A combination of evils presses itself upon American society, threatening the existence of the nation; but when Bible-believing Christians look to their pastors, too often they discover men inadequate to the times. They find leaders who understand less about moral reasoning and courage than any would have thought possible. 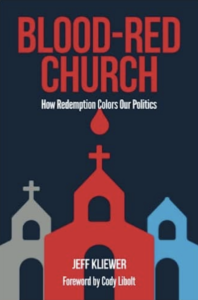 “You’re being sinfully divisive,” these pastors say to their brothers in the faith who know right from wrong and have the audacity to speak up about it. But when wolves in the church call evil “good,” the pastors hesitate. They claim the person needs to be discipled—gently and slowly. These pastors lack certainty that their own moral convictions are true, universal, and urgently necessary for all Christians to understand.

There has been a famine of sound moral and political teaching in the church. Pastors should have guided their people to understand biblical justice. Instead, they have agreed with Timothy Keller that we must never say, “No Christian can vote for…” Instead, they agree with him that, “when it comes to taking political positions, voting, determining alliances, and political involvement, the Christian has liberty of conscience.”

“Evil men do not understand justice, but those who seek the Lord understand it completely.” (Proverbs 28:5).

Without the biblical understanding of justice, how could churches be anything other than divided? Lacking sound teaching on biblical justice, churches in America have grown to include members who are morally undiscipled. Such churches then raise up leaders. Entire denominations become polluted with a culture of godlessness. Likely, in your own church, there are people who take opposite stands on issues about which the Bible clearly takes one side. In your church, there are people who believe themselves to be faithful Christians, but who have no concept of biblical justice.

How can pastors and church laymen navigate this crisis? Blood-Red Church offers a beacon in the storm. It shows seven points that cannot be compromised by any faithful person or church. This book is about lines that must be drawn. Where you or your church fall short of the biblical understanding offered in this book, you do, in fact, fall short of Christian faithfulness. The matters discussed here are that essential to the heart of Christianity morality.

There is more than one way to wreck a church. In the early and mid-20th Century, many Christian leaders abandoned a belief in the inerrancy of Scripture. In today’s “post-truth” world, the challenge is different. The main threat to biblical faithfulness is no longer that the subverters of the faith will openly teach that the Bible is unreliable. Instead, they teach that the Bible means other than what it says—or that it is not clear.

Blood-Red Church offers a framework for understanding where the various churches in America fall on this downgrade—from faithfulness to cowardice to open embrace of wickedness. Readers will come away knowing what has happened to churches and what must be done. Whether you are a layman or a pastor, you will gain certainty about what is worth defending. You will have the words and the courage for your fight.

The political controversies that face most churches today do not fall into the realm of adiaphora—indifferent matters. They fall into the realm of clear obedience vs. disobedience. An earnest study of Scripture will reveal the God-pleasing view on these seven political controversies. What Jeff offers in this book is not a full working out of Christian political theology, and what he offers is not a specific political program. He offers the baseline of faithfulness—that which all Christians can reasonably be expected to uphold on the topics now being debated in American political life.

Blood-Red Church offers us a reference point. It is a tool for any pastor or layman to use in discussion, in debate, or in preaching to show his brothers what the Bible really does command and what it really does forbid. With these seven points, the pastor or layman will be equipped to guard the holiness of his church’s teaching. He will be equipped to silence the sophistry of those who wish to capitulate to the spirit of the age.

The battle for truth is part of the battle for souls. Christians always must decide with whom they will unify—and around what. So read with eagerness. And read with a hunger to uncover something worth unifying around—namely, the truth.

Become a Christian Defender of Reason, Individualism, and Capitalism:

Get our latest book for free when you subscribe

Listen to the podcast

Misplaced Idealism: Looking for Inspiration in the Wrong Place
The Unicorn Logic Against Free Markets—A Response to Andrew Strain at First Things
General Revelation—Do You Understand It?
The Postmodernism of Traditionalism
How I Got from Alpha to Omega—A Rundown on this Month’s Presuppositionalism Discussions
What Does Justice Require? — On Racial Reconciliation

